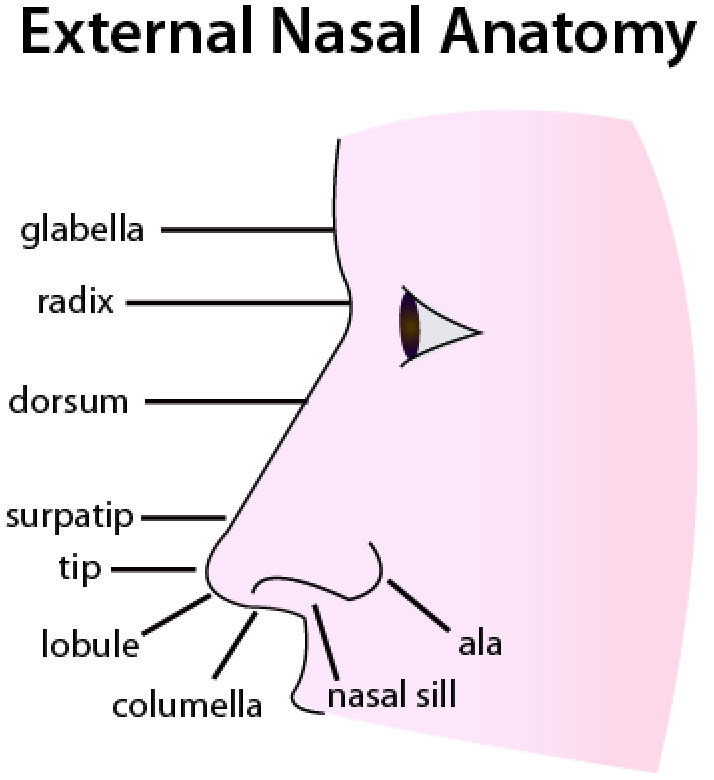 Functional rhinoplasty refers to changing the nasal shape inside and/or outside the nose to help improve nasal breathing and airflow. These issues with nasal breathing may have arisen from trauma, prior surgery, cancer, drug use, or started at birth. You may think of just a deviated septum as the cause of nasal obstruction but in fact there are so many issues that may cause nasal-airflow impairment besides the septum itself. The junction of the septum and the outer cartilage of the middle third of the nose known as the upper lateral cartilage may be too tight causing internal nasal valve collapse and may need to be addressed. The nostril may be collapsing inward or be too small and require reconstruction. This section will explore some basic ways that Dr. Lam performs nose surgery to improve nasal airway breathing. Like all pages within this section, there are simply too many methods to recount of how Dr. Lam performs functional rhinoplasty. His goal is to cover some of the basic ways he performs functional rhinoplasty so that you can better understand these techniques, especially when he discusses them with you during a consultation with him. You are probably familiar with the term septoplasty, or straightening of the septum, the cartilage that is situated inside the nose and that divides both sides of the nose. Dr. Lam routinely performs septoplasty as part of his cosmetic rhinoplasty and straightening a septum will help with nasal breathing but also may be needed to help improve the cosmetic appearance of the nose. Septoplasty, however, is only one component of the entire method to correct nasal breathing, as will be discussed in this section. Of note, Dr. Lam does not accept insurance and if you are only desiring to have functional septoplasty without any other more complicated functional improvements to the nose and/or cosmetic improvement, Dr. Lam will most likely refer you to an ENT doctor for surgical intervention. However, he would rather you not perform septoplasty in advance of a rhinoplasty if you are considering cosmetic rhinoplasty since he prefers to use septal cartilage as grafting material during surgery. If you have already undergone septoplasty, there are other cartilage sources that Dr. Lam can use as an alternative.

There are three paired turbinate structures inside both sides of the nose. Turbinates are designed to warm and humidify the nose as well as to enhance laminar airflow (non-turbulent airflow). Accordingly, Dr. Lam does not believe turbinates should ever be removed for these reasons. Instead, on occasion, the inferior turbinate is enlarged due to birth, allergies, or other reasons. In these cases, Dr. Lam will move the conchal bone (the bone inside the turbinate) over a few millimeters without actually removing the turbinate in order to improve nasal airflow. The inferior turbinate forms one of three anatomic structures that compose the internal nasal valve (see below). Osteotomies mean surgically and precisely fracturing the nasal bones. The technique is used to reduce nasal humps and to straighten the bridge of the nose. The nasal bones constitute the upper third of the nose and may need adjustment after a nasal hump is reduced or after traumatic injury among other reasons. Compressed nasal bones may cause airflow obstruction and need to be addressed during a functional rhinoplasty. Technique is discussed in greater detail in the section on Rhinoplasty of the Nasal Bridge. The nasal bones can also form part of the external nasal valve (see below).

The internal nasal valve is defined as the narrowest point of airflow in the nose, most notably the case in Caucasians who have longer, narrower noses. This is not always the case, for example, if there is a pinched external nasal valve (see below). The internal nasal valve defines a cross-section of the internal nose that is formed by a junction of the septum, the upper lateral cartilage (the cartilage of the middle third of the nose), and the inferior turbinate. At times, a septoplasty alone will help improve airflow through this narrow channel. At other times, a turbinoplasty (see above) may help, as needed. A spreader graft, i.e., a narrow cartilage graft placed between the upper lateral cartilage and septum, to open this narrow angle may be needed. Other times, osteotomies (see above) must be performed to straighten the nose, which will in most cases move the upper lateral cartilage along with it to open that area of the nose. Sometimes a combination of the above methods must be undertaken along with other minor modifications to achieve a patent nasal passage through the internal nasal valve. An extended spreader graft involves a spreader graft that extends down to join to the nasal tip to join the caudal septal extension graft see (Rhinoplasty of the Nasal Tip) for added support. He also may perform what is known as an alar batten graft to help the pinching and collapse of the area between the upper and lower lateral cartilages, which forms the junction between the internal and external nasal valves (see below). The external nasal valve is defined as the nostril rim, the nostril as composed of the lower lateral cartilage, the cartilage that forms the nostril shape. Oftentimes the reason for external valve collapse owes to over aggressive prior rhinoplasty surgery in which this cartilage has been aggressively removed or reduced or cut. Dr. Lam preserves the external nasal valve and actually further enhances the strength of the valve after his rhinoplasty rather than weakening it further unlike traditional methods (see Rhinoplasty of the Nasal Tip). Using a lateral crural strut graft, alar rim, and alar batten grafts to lend support to the nostril cartilage. The lateral crural strut graft is an underlay graft to the nostril rim that adds rigidity and support to the collapsing cartilage and extends to variable degrees to the nasal side wall. It helps with dynamic nostril collapse during inhalation as well better structural integrity when the nose is not breathing in deeply. The alar rim graft is used to restore the contracted skin of the nasal rim typically following aggressive prior rhinoplasty. Again, Dr. Lam performs many methods to improve, strengthen, and avoid issues with the external nasal valve during rhinoplasty and revision rhinoplasty cases.