Male rhinoplasty is a surgical procedure for men that is designed to correct issues with nasal function and/or to create more aesthetic nose contours. With his surgical skill and extensive experience as a facial plastic surgeon, Dr. Sam Lam is considered a top provider of male rhinoplasty in Dallas.

There are standard rhinoplasty techniques that are universally applicable for both genders. However, in terms of cosmetic goals, they are very different for men and women.

Men want to retain their masculine shape and avoid feminizing their appearance with nose surgery. Although there are many reasons men seek rhinoplasty including revision rhinoplasty, fixing prior traumatic injuries, etc., the goal of this section is to discuss only the attributes that are specific to male rhinoplasty. Men seeking a nose job have complex motivations that may differ from women. Men may want a less ethnic nose without overtly changing their ethnicity.

For example, Middle Eastern men are oftentimes born with a very high nasal bridge with a dorsal convexity (nasal hump or nasal bump). However, lowering the nasal bridge too much may cause three problems: feminize the nose, loss of ethnic identity (which may not look entirely natural), and may make the nasal tip appear too large.

This example is used to show the importance in ethnic preservation for all ethnicities but also ensuring that the nasal shape works to match the individual components of one’s nose. The opposite is the case with Asian men seeking rhinoplasty who may want a stronger, more masculine nasal bridge. Too high a bridge to make it look “white” will only look unnatural, as the radix (the starting point of the nose between the eyes) begins lower than a standard Caucasian nose does, so the surgeon must be careful to preserve a natural appearance. Whether ethnic or non-ethnic nose is concerned, Dr. Lam believes that the nose must aesthetically match the face. A very wide face should not have a very narrow nose or it will not look right. A very broad nasal tip with thick skin may preclude a significant reduction in the nasal ala (nostrils, sides of nose) or the broad tip will look unbalanced. This is true for both genders.

For men, however, it is important that the nasal bridge remain strong to avoid a feminized appearance. At times, after appropriate counseling, Dr. Lam may actually retain a small hump to the nose, which can be a masculinizing trait. It really depends on what you are seeking and what Dr. Lam advises, which can be better understood and communicated after a consultation with Dr. Lam that involves use of three-dimensional (3D) imaging. Another attribute specific for the male nose is the absence or minimization of a so-called “supratip break” in the nose (See Female Rhinoplasty). The supratip break defines a separation from the nasal bridge to the nasal tip where the nasal tip may point just beyond the bridge.

This is oftentimes considered a more feminine trait, whereas in a male nose there is oftentimes a straight profile from nasal bridge to nasal tip without a supratip break. Every case differs and there are no absolutes but this is a general rule for male rhinoplasty. Although a slight angulation of the nasal tip is preferable for most women, male rhinoplasty usually retains a relatively 90-degree angle from the lip, as a nose that tilts upwards is considered feminine in appearance. However, a ptotic nose, i.e., a droopy or drooping nose, is unattractive and can be a sign of aging.

Think about Leonardo da Vinci’s illustrations of aging men where the nasal tip is sagging downward and is not considered attractive, vital, and youthful. A droopy nasal tip can also make the nasal-tip appearance seemed larger and disproportionate to the nasal bridge. Simple elevation of the nasal tip can oftentimes fix this imbalance.

How Much Does Male Rhinoplasty Cost?

Every nose surgery performed by Dr. Lam is tailored to the unique needs of the patient, so the price of the procedure varies. The cost of your male rhinoplasty will be reviewed with you after Dr. Lam determines the optimal surgical approach for achieving your goals. Schedule a Consultation for Male Rhinoplasty in Dallas

As an artist, Dr. Lam does not believe in a cookie-cutter philosophy for male rhinoplasty. His approach involves careful consideration of each gentleman’s aesthetic goals, anatomic variations and limitations, ethnicity, functional issues, facial-shape differences, and history of prior nasal surgery. To find out if male rhinoplasty is the best treatment option for you, schedule a consultation with Dr. Lam.

Your Male Rhinoplasty will be performed by Dr. Lam' surgery center located in Plano, TX.

Dr. Lam did a fabulous job with my rhinoplasty. I have recommended him to all of my friends and family.
For Rhinoplasty FAQs, please click here
Learn more about Rhinoplasty with our Rhinoplasty Virtual Consultation 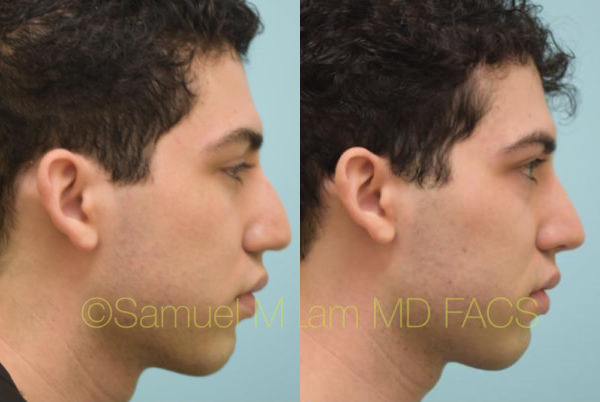