As diverse as any subject is female rhinoplasty given the complex motivations that underlie reasons for seeking nose surgery. However, this section will aim to focus on the unique characteristics of women who seek nose surgery, and you are encouraged to review other sections of this website that may relate to you as well, e.g., African rhinoplasty, revision rhinoplasty, etc. 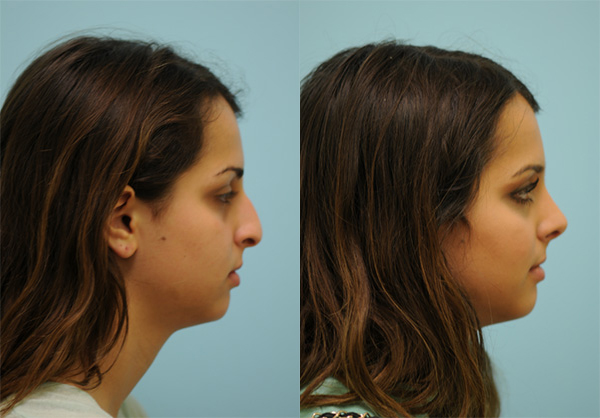 The art of rhinoplasty has historically focused on women for many reasons. First, in our society, the appearance of women has taken precedence over men, and societal acceptance for female rhinoplasty is very high. Whether we like it or not, women are judged by their attractiveness, and a nose job can be a key and profoundly powerful way to improve one’s social and/or professional standing. Traditionally, rhinoplasty is reductive in nature, i.e., the goal is to reduce an excess of tissues, like a bulbous nasal tip or a large nasal hump. These reductive rhinoplasty goals are intended not only to make a nose more refined but should make the bearer of this change appear more feminine in appearance as well. A large nasal hump and broad nasal tip are masculine features, whereas a refined nasal tip and smooth nasal profile are inherently more feminine. Of course, for women of color, a nose job is not just about refinement but also about enhancing and not effacing one’s ethnicity. Over reduction of tissues to make a nose appear “white” has become far less popular than in the past. Dr. Lam believes aggressive nasal surgery to radically change one’s ethnicity can leave a nose dysfunctional and also unnatural in appearance. He looks to soften overly ethnic features but preserve the integrity of the nose and make sure that the nose carefully matches one’s facial features and ethnicity. Dr. Lam is an expert at both Caucasian and non-Caucasian rhinoplasty and works to achieve the best nose for a particular patient given these facts.

Female rhinoplasty also involves a nose with a slight elevation of the nasal tip, not excessively so, but that would match an individual’s facial features, ethnicity, etc. A nose tip that is too large or dependent (drooping) would not only look masculine but also convey a sign of aging. Think of an extreme example of female nose aging, a witch’s nose, with a pronounced nasal bump/hump and drooping nasal tip. The witch’s nose appears both older and masculine in appearance. By restoring the proper shape to the nasal tip, the nose should look more feminine because it appears more feminine but also because a younger nose is more feminine by virtue of its youthfulness. As men and women become older, they both become more masculine in appearance. By rejuvenating the appearance of nose can by virtue of the rejuvenation make a nose also more feminine. There are certain aspects that make a female nose appear more feminine like a slight supratrip break and an attractive angle and shape, as opposed to a male nose. 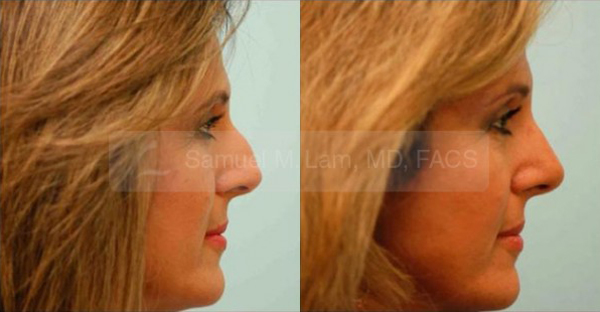 Dr. Lam is very passionate about female rhinoplasty and believes that it is the centerpiece of the face where, as he says, “a good rhinoplasty remains undetectable and only serves to bring more beauty to one’s eyes.” It can be truly surprising that when a woman takes down a relatively large hump and refines the nasal tip that the only thing that someone else notices is that the eyes look better.

Your Female Rhinoplasty will be performed by Dr. Lam' surgery center located in Plano, TX.

I am a 49 year old female who had rhinoplasty and facial fat grafting by Dr. Lam on July 30, 2015. I am a retired nurse who looked in the mirror one morning and realized it was time to do something about the way I looked. I found Dr. Lam on the internet and decided to schedule a consult. I am so glad I did. He is a wonderful doctor that has an amazing staff. They all were so kind and thoughtful as well as professional. I had both of the procedures at the same time and it could not have gone better. I am so pleased with the results. What a difference when I look in the mirror now. Dr. Lam has taken his education, skill, and experience to a level that has become an art. Thank you Dr. Lam and staff.
For Rhinoplasty FAQs, please click here
Learn more about Rhinoplasty with our Rhinoplasty Virtual Consultation