Dr. Lam is an expert in Asian rhinoplasty, having written the definitive textbook on the subject Cosmetic Surgery of the Asian Face (2002), multiple articles and book chapters on the Asian nose, not to mention lecturing on Asian nose surgery throughout the world over the past two decades. Dr. Lam believes that enhancing a nasal appearance involves making a nose appear distinctly Asian but less overly ethnic in appearance. The problem in the past with Asian rhinoplasty has been over elevating the nasal bridge and over defining the nasal tip so that the Asian nose no longer matches the ethnicity or facial features. For example, the radix of the nose (the top of the nose slope) should approximately begin from the profile view at the mid-pupil. Many individuals who desire a fake appearance will want the nose to start at the top of the eyelid crease where it begins in the Western nose. This can be seen as an artificial appearance for the Asian nose from across the room. Dr. Lam believes that this appearance is unacceptable and does not create these artificial-appearing results. Similarly, Dr. Lam does not perform a nasal-tip appearance that appears overly defined and sharp, which is oftentimes a result of the use of single-piece silicone implants, as described below in what Dr. Lam does and does not perform and why. Dr. Lam is recognized as an authority on Asian rhinoplasty and has evolved his technique over many years of experience. He began his career performing nose surgery with solid silicone implants but noted that over the years that these implants would cause issues in the nose and may at times even become infected. He progressed to what is known as “two-piece” augmentation using a solid silicone implant for the nasal bridge and cartilage-tip augmentation. With this method, he saw a marked reduction in complications but still did not like the look of an overly sharp nasal bridge. He replaced the solid silicone implant with Gore-Tex (expanded polytetraflouroethylene [ePTFE]) nasal implants and performed this method for close to a decade with minimal problems and with good cosmetic benefit. He has abandoned using this technique over the past 7 years for three reasons. ePTFE compresses slightly over time. The implant edges are still too rigid and are slightly visible in certain lighting. He has desired to remove all synthetic implants from the nose to minimize risk of infection issues, which even though he has not witnessed this issue in his patients he has managed this condition in other surgeons’ work. He then began to use diced rib and/or ear cartilage wrapped in temporalis fascia for nasal-bridge augmentation, which provided a far more natural result and less risk of complications. However, in the past few years he now prefers using diced cartilage for the bridge with tissue glue, which has replaced the need for temporalis fascia. Without needing temporalis fascia, there is no risk of hair loss in the area of harvest, and Dr. Lam can more precisely shape the nasal bridge and reshape it immediately if he is not entirely satisfied. 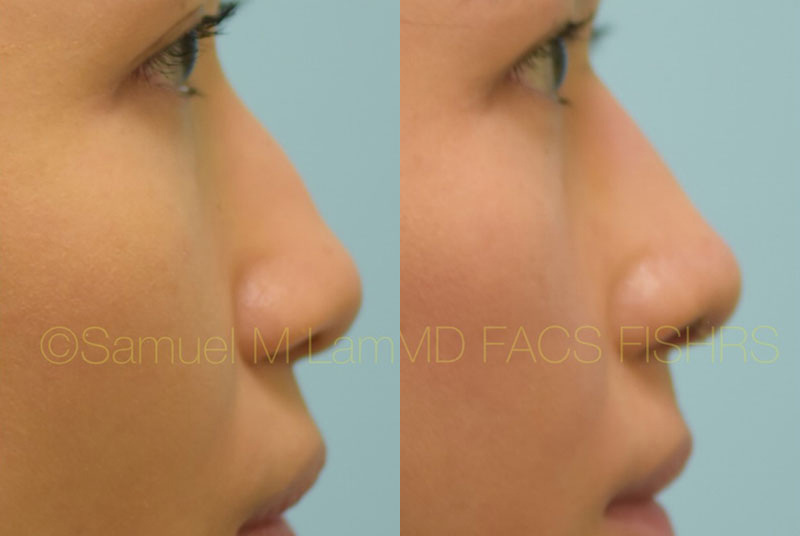 Along with major advances in technical development of his work on the nasal bridge, he has great advanced techniques for improving the Asian nasal tip. As mentioned, he began with performing a nasal tip simply by using a preformed silicone implant. The problem with this technique is that the nasal tip was fraught with complications and, as importantly, simply appeared too sharp and unnatural, an issue that continued to worsen after a year following surgery. He never tried ePTFE in the nasal tip and advanced straight to cartilage augmentation. However, there have been tremendous advances in nasal-tip design and creation. The single most important development has been the advent of the caudal septal extension graft (CSEG). This graft affixes the nasal tip to the septum above allowing for far more predictable nasal-tip results than in the past. The use of a columellar strut in the past would lead to undesirable loss of nasal-tip support oftentimes even a week after surgery and possibly ongoing changes after a few weeks to months. Dr. Lam believes that the use of a CSEG provides very predictable tip outcomes with increased rather than decreased stability. Also, developing a nasal tip with added stability not only helps with a more definite cosmetic outcome but better preservation and enhancement of nasal-tip function, especially when it concerns the Asian nose, which by its very nature has weaker nasal-tip cartilages than the Caucasian nose. By supporting the nasal tip to the septum, the nasal tip can also be projected forward to narrow the alar region (the outer nostrils) even without reducing the alar side walls. Dr. Lam also uses a technique known as a lateral turn-in flap in which he can narrow the bulbous nasal appearance without actually weakening the nose. Finally, he has multiple methods to narrow the nasal-base width to ensure a natural shape, minimize scarring, and to enhance nasal balance. All of these techniques are explored with greater depth in the section on technique.

Your Asian Rhinoplasty will be performed by Dr. Lam' surgery center located in Plano, TX.

Not only the surgery went smoothly on the day of the operation, my recovery was easy where i did not feel any pain in my nose and surrounding areas. The unveiling of the new nose (1 week post surgery) was extremely satisfying, my nose looks better than I expected. I am so glad I came to Dr. Lam for this procedure. His expertise, experience, and his craftsmanship made this magic happen. Thank you. I’d highly recommend Dr. Lam to all patients who are looking for rhinoplasty, especially Asians.
For Rhinoplasty FAQs, please click here
Learn more about Rhinoplasty with our Rhinoplasty Virtual Consultation One Week Post-Op with Photos