Like other ethnic terms, Hispanic rhinoplasty, which Dr. Lam performs frequently, is also a broadly encompassing term that may be descriptive and at the same time misleading as well. For example, the term Mestizo nose has been used to describe Hispanic noses and includes the variegated and diverse elements that make up the Hispanic population. Mestizo nose surgery includes treatment of noses that have classically white features due to the Spanish and Portuguese conquests of the New World or marriages to other Europeans in the ancestral past or currently. Mestizo noses may also have typically Asian features due to mixing with native indigenous populations of North, Central, and South America. Finally, due to the African slave trade, predominantly in Cuba, Haiti, Dominican Republic, but also throughout the New World, features of African descent may be a small or large part of the Hispanic nose. Dr. Lam is very skilled at all aspects of Hispanic rhinoplasty and understands the delicate complexity of the anatomy as well as the goals for this kind of nasal enhancement. Depending on the complex mixture of the Mestizo nose, if your nose has more African or Asian features, you may also want to explore those parts of this website in preparation for or review following a consultation with Dr. Lam. Besides ethnicity as a general concept, Dr. Lam also focuses on your gender and facial features along with your aesthetic goals to help counsel you on the best strategy that is tailored to you. The most important aspects that Dr. Lam advocates are safety and naturalness when it comes to rhinoplasty. Safety is defined as performing structurally sound rhinoplasty that preserves nasal function and achieves reliable aesthetic result. For example, he remembers a Hispanic patient who came to him from El Paso whose nose was actually bigger after the nose job rather than smaller and asked him why. He looked at and felt the nose and noticed that there was considerable scar tissue under the skin. He immediately sensed that the original surgeon overly reduced the cartilage (which are thinner with Hispanics oftentimes) and the overlying thick skin could not shrink down appropriately. He injected a scar dissolver and had the patient tape the nose and after three sessions was able to markedly improve the nasal appearance. It is advisable to review the technique section for the nasal tip and nasal bridge to better understand Dr. Lam’s technique since his consultation usually involves description of the technique as well as philosophy, examination, discussion of goals, and 3D imaging. Living and practicing in Texas, Dr. Lam performs a large percentage of his rhinoplasties for the Hispanic patient and is considered an expert in this field of ethnic rhinoplasty. His passion is in achieving natural results that are aesthetically pleasing, natural, and functionally preserved.

Your Hispanic Rhinoplasty will be performed by Dr. Lam' surgery center located in Plano, TX.

I had a rhinoplasty the 26th of November with Dr. Lam. I originally Googled him and was impressed with how much information about him there was about him versus other surgeons. He has videos on YouTube, reviews on Yelp and he’s all over Facebook. He’s an amazing surgeon. His staff is kind, caring and they kind of treat you like family. I’m ecstatic with the results and I couldn’t be any happier. Everything went better than I expected. I thought I was going to be in a lot of pain, but I really didn’t have a lot of pain at all. The cast was a little uncomfortable, but that was about it. I definitely recommend him. He’s such a knowledgeable and wonderful doctor and he really cares about his patients. I’m just really happy.
For Rhinoplasty FAQs, please click here
Learn more about Rhinoplasty with our Rhinoplasty Virtual Consultation 9 Years Out From Hispanic Rhinoplasty CloseUp of Incision 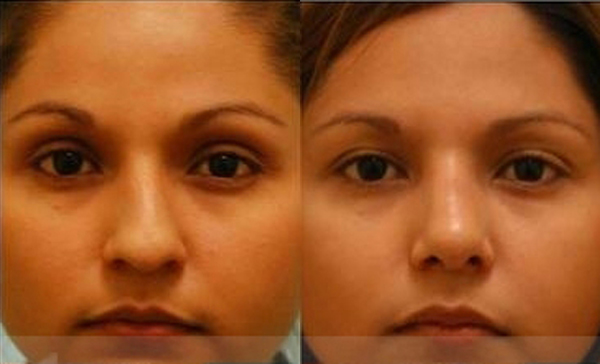